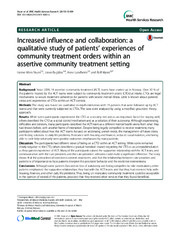 Background - Since 2009, 14 assertive community treatment (ACT) teams have started up in Norway. Over 30 % of the patients treated by the ACT teams were subject to community treatment orders (CTOs) at intake. CTOs are legal mechanisms to secure treatment adherence for patients with severe mental illness. Little is known about patients’ views and experiences of CTOs within an ACT context.

Methods - The study was based on qualitative in depth interviews with 15 patients that were followed up by ACT teams and that were currently subjected to CTOs. The data were analyzed by using a modified grounded theory approach.

Results - While some participants experienced the CTO as a security net and as an important factor for staying well, others described the CTO as a social control mechanism and as a violation of their autonomy. Although experiencing difficulties and tensions, many participants described the ACT team as a different mental health arena from what they had known before, with another frame of interaction. Despite being legally compelled to receive treatment, many participants talked about how the ACT teams focused on addressing unmet needs, the management of future crises, and finding solutions to daily life problems. Assistance with housing and finances, reduced social isolation, and being able to seek help voluntarily were positive outcomes emphasized by many patients.

Discussion - The participants had different views of being on a CTO within an ACT setting. While some remained clearly negative to the CTO, others described a gradual transition toward regarding the CTO as an acceptablesolution as they gained experience of ACT. Many of the participants valued the supportive relationship withthe ACT team, and communication with the care providers and the care providers’ attitudes could make a significant difference. The study shows that the perception of coercion is context dependent, and that the relationship between care providers and patients is of importance to how patients interpret the providers’ behavior and the restrictive interventions.

Conclusions - Although some patients focused on loss of autonomy and being compelled to take medications, other patients emphasised the supportive relationships they had with the ACT teams and that they had received help with housing, finances, and other daily life problems. Thus, being on mandated community treatment could be acceptable in the opinion of several of the patients, provided that they received other services that they found beneficial.