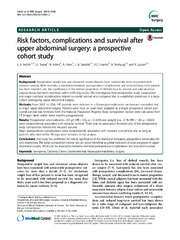 Background: Preoperative weight loss and abnormal serum-albumin have traditionally been associated with reduced survival. More recently, a correlation between postoperative complications and reduced long-term survival has been reported and the significance of the relative proportion of skeletal muscle, visceral and subcutaneous adipose tissue has been examined with conflicting results. We investigated how preoperative body composition and major non-fatal complications related to overall survival and compared this to established predictors in a large cohort undergoing upper abdominal surgery.

Methods: From 2001 to 2006, 447 patients were included in a Norwegian multicenter randomized controlled trial in major upper abdominal surgery. Patients were now, six years later, analyzed as a single prospective cohort and overall survival was retrieved from the National Population Registry. Body composition indices were calculated from CT images taken within three months preoperatively.

Conclusions: Our study has confirmed the robust significance of the traditional indicators, preoperative serum-albumin and weight loss. The body composition indices did not prove beneficial as global indicators of poor prognosis in upper abdominal surgery. We found no association between non-fatal postoperative complications and long-term survival.