Use of complementary and alternative medicine in patients with health complaints attributed to former dental amalgam fillings. 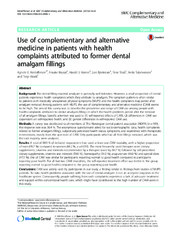 Background The dental filling material amalgam is generally well tolerated. However, a small proportion of dental patients experience health complaints which they attribute to amalgam. The symptom pattern is often similar to patients with medically unexplained physical symptoms (MUPS) and the health complaints may persist after amalgam removal. Among patients with MUPS, the use of complementary and alternative medicine (CAM) seems to be high. The aim of this survey was to describe the prevalence and range of CAM use among people with health complaints attributed to dental amalgam fillings in which the health problems persist after the removal of all amalgam fillings. Specific attention was paid to (1) self-reported effects of CAM, (2) differences in CAM use dependent on self-reported health, and (3) gender differences in self-reported CAM use.

Methods A survey was distributed to all members of The Norwegian dental patient association (NDPA) (n = 999), the response rate was 36.4 %. The anonymous questionnaire asked for socio-demographic data, health complaints related to former amalgam fillings, subjectively perceived health status, symptoms, and experience with therapeutic interventions, mostly from the spectrum of CAM. Only participants who had all their fillings removed, which was the vast majority, were analysed.

Results A total of 88.9 % of included respondents had used at least one CAM modality, with a higher proportion of men (95.7 %) compared to women (86.2 %, p = 0.015). The most frequently used therapies were dietary supplements, vitamins and minerals recommended by a therapist (used by 66.7 %) followed by self-prescribed dietary supplements, vitamins and minerals (59.0 %), homeopathy (54.0 %), acupuncture (48.8 %) and special diets (47.5 %). Use of CAM was similar for participants reporting normal to good health compared to participants reporting poor health. For all but two CAM modalities, the self-reported treatment effect was better in the group reporting normal to good health compared to the group reporting poor health.

Conclusions CAM was widely used by participants in our study, a finding similar to findings from studies of MUPS patients. To date, health problems associated with the use of dental amalgam is not an accepted diagnosis in the healthcare system. Consequently, people suffering from such complaints experience a lack of adequate treatment and support within conventional health care, which might have contributed to the high number of CAM users in this study.