Use of complementary and alternative medicine within Norwegian hospitals 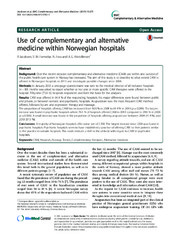 Background: Over the recent decades complementary and alternative medicine (CAM) use within and outside of the public health care system in Norway has increased. The aim of this study is to describe to what extent CAM is offered in Norwegian hospitals in 2013 and investigate possible changes since 2008.

Methods: In January 2013 a one-page questionnaire was sent to the medical director of all included hospitals (n = 80). He/she was asked to report whether or not one or more specific CAM therapies were offered in the hospital. Fifty-nine (73.8 %) hospitals responded and form the basis for the analyses.