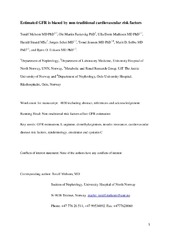 Background: Estimated glomerular filtration rate (eGFR) based on either cystatin C or creatinine perform similarly in estimating measured GFR, but associate differently with cardiovascular disease (CVD) and mortality. This could be due to confounding by non-GFRrelated traits associated with cystatin C and creatinine levels. We investigated non-GFRrelated associations between eGFR and two types of non-traditional risk factors for CVD and death: L-arginine/dimethylarginine metabolism and insulin resistance.

Methods: GFR was measured via iohexol clearance in a cross-sectional study of 1,624 middle-aged persons from the general population without CVD, diabetes or chronic kidney disease. The dimethylarginines were measured using liquid chromatography tandem mass spectrometry (LC-MSMS). Insulin resistance was determined by the homeostasis model assessment (HOMA-IR).

Conclusion: Both creatinine- and cystatin C-based eGFR are influenced by non-traditional risk factors, which may bias risk prediction by eGFR in longitudinal studies.