When life got in the way: How danish and norwegian immigrant women in Sweden reason about cervical screening and why they postpone attendance 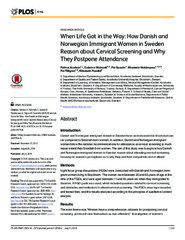 Methods Eight focus group discussions (FGDs) were conducted with Danish and Norwegian immigrant women living in Stockholm. The women were between 26 and 66 years of age at the time of the FGDs, and were aged between <1 and 48 years old when they immigrated to Sweden. A FGD guide was used, which included questions related to cervical screening, and obstacles and motivators to attend cervical screening. The FGDs were tape recorded and transcribed, and the results analysed according to the principles of qualitative content analysis.

Conclusions The rationale used to postpone cervical screening, in combination with the fact that women do not consider themselves to be non-attenders, indicates that they have not actively taken a stance against cervical screening, and reveals an opportunity to motivate these women to attend.