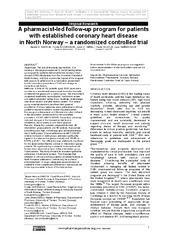 OBJECTIVES: The aim of the study was twofold; 1) to develop a clinical pharmacist-led 12 month lasting follow-up program for patients with established coronary heart disease (CHD) discharged from the University Hospital of North Norway, and 2) to explore the impact of the program with regards to adherence to a medication assessment tool for secondary prevention of CHD and change in biomedical risk factors.

CONCLUSIONS: The study showed an increased guideline adherence in both study groups. This indicates that attention to clinical practice guideline recommendations in itself increases adherence - which may be a clinical pharmacist task. A larger adequately powered study is needed to show a significant difference in biomedical risk factor improvements in favor of the intervention. Amendments to the follow-up program are suggested before implementation in standard patient care can be recommended.