Effects of high intensity interval training on pregnant rats, and the placenta, heart and liver of their fetuses. 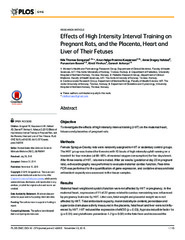 Objective To investigate the effects of high intensity interval training (HIIT) on the maternal heart, fetuses and placentas of pregnant rats.

Methods Female Sprague-Dawley rats were randomly assigned to HIIT or sedentary control groups. The HIIT group was trained for 6 weeks with 10 bouts of high intensity uphill running on a treadmill for four minutes (at 85–90% of maximal oxygen consumption) for five days/week. After three weeks of HIIT, rats were mated. After six weeks (gestational day 20 in pregnant rats), echocardiography was performed to evaluate maternal cardiac function. Real-time PCR was performed for the quantification of gene expression, and oxidative stress and total antioxidant capacity was assessed in the tissue samples.

Results Maternal heart weight and systolic function were not affected by HIIT or pregnancy. In the maternal heart, expression of 11 of 22 genes related to cardiac remodeling was influenced by pregnancy but none by HIIT. Litter size, fetal weight and placental weight were not affected by HIIT. Total antioxidant capacity, malondialdehyde content, peroxidase and superoxide dismutase activity measured in the placenta, fetal heart and liver were not influenced by HIIT. HIIT reduced the expression of eNOS (p = 0.03), hypoxia-inducible factor 1α (p = 0.04) and glutathione peroxidase 4.2 (p = 0.02) in the fetal liver and increased the expression of vascular endothelial growth factor-β (p = 0.014), superoxide dismutase 1 (p = 0.001) and tissue inhibitor of metallopeptidase 3 (p = 0.049) in the fetal heart.

Conclusions Maternal cardiac function and gene expression was not affected by HIIT. Although HIIT did not affect fetal growth, level of oxidative stress and total antioxidant capacity in the fetal tissues, some genes related to oxidative stress were altered in the fetal heart and liver indicating that protective mechanisms may be activated.