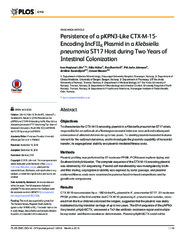 Objectives To characterize the CTX-M-15-encoding plasmid in a Klebsiella pneumoniae ST17 strain, responsible for an outbreak at a Norwegian neonatal intensive care unit and subsequent colonization of affected children for up to two years. To identify plasmid-mediated features relevant for the outbreak dynamics, and to investigate the plasmids capability of horizontal transfer, its segregational stability and plasmid-mediated fitness costs.

Methods Plasmid profiling was performed by S1-nuclease PFGE, PCR-based replicon typing and Southern blot-hybridization. The complete sequence of the CTX-M-15-encoding plasmid was obtained by 454 sequencing. Plasmid self-transferability was investigated by brothand filter mating, segregational stability was explored by serial passage, and plasmidconferred fitness costs were examined in pairwise head-to-head competitions and by growth rate comparisons.

Results CTX-M-15 was encoded by a ~180 kb IncFIIK plasmid in K. pneumoniae ST17. S1-nuclease PFGE profiles of the first and the last CTX-M-15-producing K. pneumoniae isolates, recovered from the four children colonized the longest, suggested that the plasmid was stably maintained during intestinal carriage of up to two years. The DNA sequence of the pKPN3- like plasmid, pKp848CTX, uncovered a Tn3-like antibiotic resistance region and multiple heavy metal- and thermoresistance determinants. Plasmid pKp848CTX could not be transferred to Escherichia coli in vitro and we found no evidence to support horizontal plasmid transfer in vivo. Segregational plasmid loss ranging from 0.83% to 17.5% was demonstrated in evolved populations in vitro, but only minor fitness costs were associated with plasmid-carriage.

Conclusions Plasmid pKp848CTX encodes phenotypic traits, which may have had an impact on the fitness and survival of the K. pneumoniae ST17 strain in the outbreak setting. The antibiotic resistance plasmid pKp848CTX was stably maintained during two years of intestinal colonization, conferring negligible fitness cost to its host, and thus seem well adapted to its K. pneumoniae host.