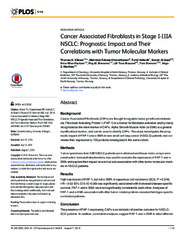 Background Cancer Associated Fibroblasts (CAFs) are thought to regulate tumor growth and metastasis. Fibroblast Activating Protein 1 (FAP-1) is a marker for fibroblast activation and by many recognized as the main marker of CAFs. Alpha Smooth Muscle Actin (α-SMA) is a general myofibroblast marker, and can be used to identify CAFs. This study investigates the prognostic impact of FAP-1 and α-SMA in non-small cell lung cancer (NSCLC) patients and correlates their expression to 105 proteins investigated in the same cohort.

Methods Tumor specimens from 536 NSCLC patients were obtained and tissue micro-arrays were constructed. Immunohistochemistry was used to evaluate the expression of FAP-1 and α- SMA and explore their impact on survival and association with other tumor molecular markers in NSCLC patients.

Results High expression of FAP-1, but not α-SMA, in squamous cell carcinoma (SCC, P = 0.043, HR = 0.63 95% CI 0.40–0.99) was significantly associated with increased disease-specific survival. FAP-1 and α-SMA were not significantly correlated to each other. Analyses of FAP-1 and α-SMA associated with other tumor-related proteins revealed histotype-specific correlation patterns.

Conclusion The presence of FAP-1 expressing CAFs is an indicator of positive outcome for NSCLCSCC patients. In addition, correlation analyses suggest FAP-1 and α-SMA to label different subsets of fibroblasts and their associations with other tumor-related proteins diverge according to histological subtype.