Palliative radiotherapy with or without additional care by a multidisciplinary palliative care team in patients with newly diagnosed cancer: A retrospective matched pairs comparison 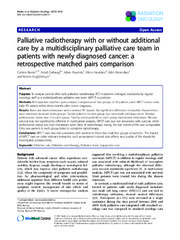 Results: Bone and brain metastases were common RT targets. No significant differences in baseline characteristics were observed between both groups. Twelve patients in each group had non-small cell lung cancer. Median performance status was 2 in each group. Twenty-seven patients in each group had distant metastases. Median survival was not significantly different. In multivariate analysis, MPCT care was not associated with survival, while performance status and liver metastases were. Rate of radiotherapy during the last month of life was comparable. Only one patient in each group failed to complete radiotherapy.

Conclusions: MPCT care was not associated with survival in these two matched groups of patients. The impact of MPCT care on other relevant endpoints such as symptom control, side effects and quality of life should be investigated prospectively.