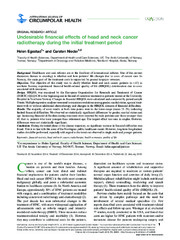 Background. Healthcare cost and reforms are at the forefront of international debates. One of the current discussion themes in oncology is whether and how patients’ life changes due to costs of cancer care. In Norway, the main part of the treatment costs is supported by general taxpayer revenues.

Objectives. The objective of this study was to clarify whether head and neck cancer patients (n67) in northern Norway experienced financial health-related quality of life (HRQOL) deterioration due to costs associated with treatment.

Design. HRQOL was examined by the European Organization for Research and Treatment of Cancer (EORTC) QLQ-C30 in the beginning and in the end of radiation treatment in patients treated at the University Hospital in Northern Norway. Changes in financial HRQOL were calculated and compared by paired sample T-tests. Multiple regression analyses were used to examine correlations among gender, marital status, age and treatment with or without additional chemotherapy and changes in the HRQOL domain of financial difficulties.

Results. The majority of score results at both time points were in the lower range (mean 1525), indicating limited financial difficulties. We observed no statistically significant differences by gender, marital status and age. Increasing financial difficulties during treatment were reported by male patients and those younger than 65, that is, patients who were younger than retirement age. The largest effect was seen in singles. However, differences were not statistically significant.

Conclusions. During the initial phase of the disease trajectory, no significant increase in financial difficulties was found. This is in line with the aims of the Norwegian public healthcare model. However, long-term longitudinal studies should be performed, especially with regard to the trends we observed in single, male and younger patients.