A scoping review of Indigenous suicide prevention in circumpolar regions 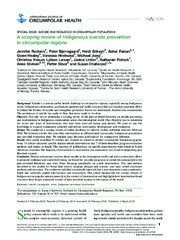 Background. Suicide is a serious public health challenge in circumpolar regions, especially among Indigenous youth. Indigenous communities, government agencies and health care providers are making concerted efforts to reduce the burden of suicide and strengthen protective factors for individuals, families and communities. The persistence of suicide has made it clear that more needs to be done.

Objective. Our aim was to undertake a scoping review of the peer-reviewed literature on suicide prevention and interventions in Indigenous communities across the circumpolar north. Our objective was to determine the extent and types of interventions that have been reported during past decade. We want to use this knowledge to support community initiative and inform intervention development and evaluation.

Design. We conducted a scoping review of online databases to identify studies published between 2004 and 2014. We included articles that described interventions in differentiated circumpolar Indigenous populations and provided evaluation data. We retained grey literature publications for comparative reference.

Results. Our search identified 95 articles that focused on suicide in distinct circumpolar Indigenous populations; 19 articles discussed specific suicide-related interventions and 7 of these described program evaluation methods and results in detail. The majority of publications on specific interventions were found in North American countries. The majority of prevention or intervention documentation was found in supporting grey literature sources.

Conclusion. Despite widespread concern about suicide in the circumpolar world and active community efforts to promote resilience and mental well-being, we found few recorded programs or initiatives documented in the peer-reviewed literature, and even fewer focusing specifically on youth intervention. The interventions described in the studies we found had diverse program designs and content, and used varied evaluation methods and outcomes. The studies we included consistently reported that it was important to use communitybased and culturally guided interventions and evaluations. This article summarizes the current climate of Indigenous circumpolar suicide research in the context of intervention and highlights how intervention-based outcomes have largely remained outside of peer-reviewed sources in this region of the world.