‘‘We are like lemmings’’: making sense of the cultural meaning(s) of suicide among the indigenous Sami in Sweden 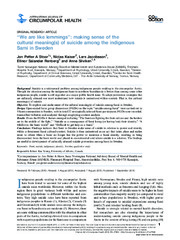 Background. Suicide is a widespread problem among indigenous people residing in the circumpolar Arctic. Though the situation among the indigenous Sami in northern Scandinavia is better than among some other indigenous people, suicide is still regarded as a major public health issue. To adapt prevention strategies that are culturally attuned one must understand how suicide is understood within context. That is, the cultural meaning(s) of suicide.

Objective. To explore and make sense of the cultural meaning(s) of suicide among Sami in Sweden.

Design. Open-ended focus group discussions (FGDs) on the topic ‘‘suicide among Sami’’ were carried out in 5 Sami communities in Sweden, with in total 22 strategically selected Sami participants. FGDs were recorded, transcribed verbatim and analyzed through employing content analysis.

Results. From the FGDs 4 themes emerged including ‘‘The Sami are fighting for their culture and the herders are in the middle of the fight,’’ ‘‘Suicide as a consequence of Sami losing (or having lost) their identity,’’ ‘‘A wildfire in the Sami world’’ and ‘‘Difficult to get help as a Sami.’’

Conclusions. Findings indicate that Sami in Sweden make sense of suicide in relation to power and identity within a threatened Sami cultural context. Suicide is then understood as an act that takes place and makes sense to others when a Sami no longer has the power to maintain a Sami identity, resulting in being disconnected from the Sami world and placed in an existential void where suicide is a solution. The findings are useful in development of culturally attuned suicide prevention among Sami in Sweden.