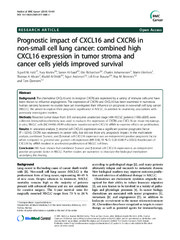 Background: The chemokine CXCL16 and its receptor CXCR6 are expressed by a variety of immune cells and have been shown to influence angiogenesis. The expression of CXCR6 and CXCL16 has been examined in numerous human cancers; however no studies have yet investigated their influence on prognosis in non-small cell lung cancer (NSCLC). We aimed to explore their prognostic significance in NSCLC, in addition to examining associations with previously investigated markers.

Methods: Resected tumor tissue from 335 consecutive unselected stage I-IIIA NSCLC patients (1990–2005) were collected. Immunohistochemistry was used to evaluate the expression of CXCR6 and CXCL16 on tissue microarrays. In vitro, NSCLC cells (NCI-H460, A549 cells) were transfected with CXCL16 siRNA to examine effects on proliferation.

Results: In univariate analysis, ↑ stromal cell CXCL16 expression was a significant positive prognostic factor (P = 0.016). CXCR6 was expressed in cancer cells, but did not show any prognostic impact. In the multivariate analysis, combined ↑cancer, and ↑stromal cell CXCL16 expression was an independent positive prognostic factor when compared to ↓stromal and ↓cancer cell expression (HR: 0.42; 95 % CI: 0.20–0.88; P = 0.022). Knockdown of CXCL16 by siRNA resulted in accelerated proliferation of NSCLC cell lines.

Conclusion: We have shown that combined ↑cancer and ↑stromal cell CXCL16 expression is an independent positive prognostic factor in NSCLC. Further studies are warranted to elucidate the biological mechanism underlying this finding.