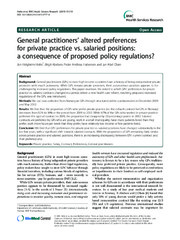 Background: General practitioners (GPs) in most high-income countries have a history of being independent private providers with much autonomy. While GPs remain private providers, their autonomous position appears to be challenged by increased policy regulations. This paper examines the extent to which GPs’ preferences for private practice vs. salaried contracts changed in a period where a new health care reform, involving proposed increased regulations of the GPs, was introduced.

Methods: We use data collected from Norwegian GPs through structured online questionnaires in December 2009 and May 2012.

Results: We find that the proportion of GPs who prefer private practice (i.e. the default contract for GPs in Norway) decreases from 52% to 36% in the period from 2009 to 2012. While 67% of the GPs who worked in private practice preferred this type of contract in 2009, the proportion had dropped by 20 percentage points in 2012. Salaried contracts are preferred by GPs who are young, work in a small municipality, have more patients listed than they prefer, work more hours per week than they prefer, have relatively low income or few patients listed.

Conclusion: We find that GPs’ preferences for private practice vs. salaried positions have changed substantially in the last few years, with a significant shift towards salaried contracts. With the proportions of GPs remaining fairly similar across private practice and salaried positions, there is an increasing discrepancy between GPs’ current contract and their preferred one.