What characterises women who eat potatoes? A cross-sectional study among 74,208 women in the Norwegian Women and Cancer cohort 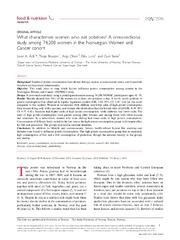 Objective: This study aims to map which factors influence potato consumption among women in the Norwegian Women and Cancer (NOWAC) study.