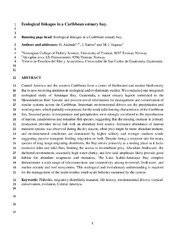 Central America and the western Caribbean form a center of freshwater and marine biodiversity that is now receiving attention in ecological and evolutionary studies. We conducted one integrated ecological study of Amatique Bay, Guatemala, a major estuary lagoon connected to the Mesoamerican Reef System, and provide novel information for management and conservation of similar systems across the Caribbean. Important environmental drivers are the precipitation and wind regimes, which partially compensate for the weak tidal-forcing characteristic of the Caribbean Sea. Seasonal peaks in temperature and precipitation were strongly correlated to the reproduction of marine, catadromous and estuarine fish species, suggesting that the ensuing increase in primary production provides larval fish with an abundant food source. Increased abundance of marine transient species was observed during the dry season, when prey might be more abundant inshore, and environmental conditions are dominated by higher salinity and stronger onshore winds suggesting passive transport, feeding migration or both. Despite being a stopover site for many species of long-range migrating shorebirds, the Bay serves primarily as a resting place as it lacks extensive tides and tidal flats, limiting the access to invertebrate prey. Abundant freshwater, the sheltered environment, seasonally high water clarity, and low tidal amplitude likely provide good habitat for abundant seagrasses and manatees. The Lake Izabal-Amatique Bay complex demonstrates a wide range of teleconnections and connectivity among terrestrial, freshwater, and marine oceanic and reef ecosystems. This ecological and evolutionary understanding is required for the management of the multi-trophic small-scale fisheries sustained by the system.