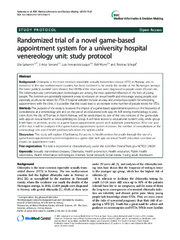 Background: Chlamydia is the most common reportable sexually transmitted disease (STD) in Norway, and its incidence in the two northernmost counties has been disclosed to be nearly the double of the Norwegian average. The latest publicly available rates showed that 85.6% of the new cases were diagnosed in people under 29 years old. The information and communication technologies are among the most powerful influences in the lives of young people. The Internet can potentially represent a way to educate on sexual health and encourage young people, and especially youth, to be tested for STDs. If hospital websites include an easy and anonymous system for scheduling appointments with the clinic, it is possible that this could lead to an increase in the number of people tested for STDs.

Methods: The purpose of the study is to assess the impact of a game-based appointment system on the frequency of consultations at a venereology unit and on the use of an educational web app. An A/B testing methodology is used. Users from the city of Tromsø, in North Norway, will be randomized to one of the two versions of the game-style web app on sexual health at www.sjekkdeg.no. Group A will have access to educational content only, while group B will have, in addition, access to a game-based appointment system with automatic prioritization. After one year of the trial, it will be analyzed if the game-based appointment system increases the number of consultations at the venereology unit and if health professionals deem the system useful.

Discussion: This study will explore if facilitating the access to health services for youth through the use of a game-based appointment system integrated in a game-style web app on sexual health education can have an impact on appointment rates.