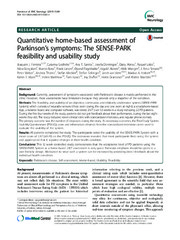 Background: Currently, assessment of symptoms associated with Parkinson’s disease is mainly performed in the clinic. However, these assessments have limitations because they provide only a snapshot of the condition.

Methods: The feasibility and usability of an objective, continuous and relatively unobtrusive system (SENSE-PARK System), which consists of wearable sensors (three worn during the day and one worn at night), a smartphone-based App, a balance board and computer software, was tested 24/7 over 12 weeks in a study including 22 PD patients. During the first four weeks of the study, patients did not get feedback about their performance, during the last eight weeks they did. The study included seven clinical visits with standardized interviews, and regular phone contact. The primary outcome was the number of drop-outs during the study. As secondary outcomes, the Post-Study System Usability Questionnaire (PSSUQ), score and information obtained from the standardized interviews were used to evaluate the usability of the system.

Results: All patients completed the study. The participants rated the usability of the SENSE-PARK System with a mean score of 2.67 (±0.49) on the PSSUQ. The interviews revealed that most participants liked using the system and appreciated that it signaled changes in their health condition.

Conclusions: This 12 week controlled study demonstrates that the acceptance level of PD patients using the SENSE-PARK System as a home-based 24/7 assessment is very good. Particular emphasis should be given to a user-friendly design. Motivation to wear such a system can be increased by providing direct feedback about the individual health condition.