Young doctors’ preferences for payment systems: the influence of gender and personality traits 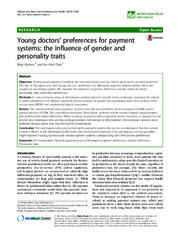 Objective: Activity-based payment contracts are common among doctors, but to what extent are they preferred? The aim of this paper is to elicit young doctors’ preferences for alternative payment systems before they have adapted to an existing system. We examine the existence of gender differences and the extent to which personality traits determine preferences.

Methods: A cross-sectional survey of all final-year medical students and all interns in Norway examined the extent to which preferences for different payment systems depend on gender and personality traits. Data analysis relied on one-way ANOVA and multinomial logistic regression.

Results: The current activity-based payment systems were the least preferred, both in hospitals (16.6%) and in general practice (19.7%). The contrasting alternative “fixed salary” achieved similar relative support. Approximately half preferred the hybrid alternative. When certainty associated with a payment system increased, its appeal rose for women and individuals who are less prestige-oriented, risk-tolerant or effort-tolerant. Activity-based systems were preferred among status- and income-oriented respondents.

Conclusion: The vast majority of young doctors prefer payment systems that are less activity-based than the current contracts offered in the Norwegian health service. Recruitment and retention in less prestigious medical specialities might improve if young doctors could choose payment systems corresponding with their diverse preferences.