Analgesic use in a Norwegian general population: Change over time and high-risk use - The Tromsø Study 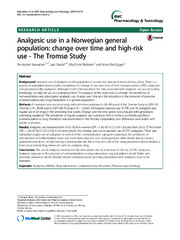 Methods: A repeated cross-sectional study with data from participants (30–89 years) of the Tromsø Study in 2001–02 (Tromsø 5; N = 8039) and in 2007–08 (Tromsø 6; N = 12,981). Participants reported use of OTC and Rx analgesics and regular use of all drugs in the preceding four weeks. Change over the time period was analyzed with generalized estimating equations. The prevalence of regular analgesic use in persons with or without a clinically significant contraindication or drug interaction was determined in the Tromsø 6 population, and differences were tested with logistic regression.

Results: Analgesic use increased from 54 to 60 % in women (OR = 1.24, 95 % CI 1.15–1.32) and from 29 to 37 % in men (OR = 1.39, 95 % CI 1.27–1.52) in the time period; the increase was due to sporadic use of OTC analgesics. There was substantial regular use of analgesics in several of the contraindication categories examined; the prevalence of non-steroidal anti-inflammatory drugs was more than eight per cent among persons with chronic kidney disease, gastrointestinal ulcers, or high primary cardiovascular risk. About four per cent of the study population demonstrated at least one potential drug interaction with an analgesic drug.