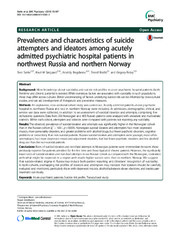 Background: More knowledge about suicidality and suicide risk profiles in acute psychiatric hospital patients (both first-time and chronic patients) is needed. While numerous factors are associated with suicidality in such populations, these may differ across cultures. Better understanding of factors underlying suicide risk can be informed by cross-cultural studies, and can aid development of therapeutic and preventive measures.

Methods: An explorative, cross-sectional cohort study was carried out. Acutely admitted patients at one psychiatric hospital in northwest Russia and two in northern Norway were included. At admission, demographic, clinical, and service use data were collected, in addition to an assessment of suicidal ideation and attempts, comprising five dichotomic questions. Data from 358 Norwegian and 465 Russian patients were analyzed with univariate and multivariate statistics. Within each cohort, attempters and ideators were compared with patients not reporting any suicidality.

Results: The observed prevalence of suicidal ideation and attempts was significantly higher in the Norwegian cohort than in the Russian cohort (χ2 = 168.1, p < 0,001). Norwegian suicidal ideators and attempters had more depressed moods, more personality disorders, and greater problems with alcohol/drugs, but fewer psychotic disorders, cognitive problems or overactivity than non-suicidal patients. Russian suicidal ideators and attempters were younger, more often unemployed, had more depressed mood and adjustment disorders, but had fewer psychotic disorders and less alcohol/ drug use than the non-suicidal patients.

Conclusions: Rates of suicidal ideation and non-fatal attempts in Norwegian patients were intermediate between those previously reported for patients admitted for the first time and those typical of chronic patients. However, the significantly lower rates of suicidal ideation and non-fatal attempts in our Russian cohort as compared with the Norwegian, contrasted with what might be expected in a region with much higher suicide rates than in northern Norway. We suggest that suicide-related stigma in Russia may reduce both patient reporting and clinicians’ recognition of suicidality. In both cohorts, overlapping risk profiles of ideators and attempters may indicate that ideators should be carefully evaluated and monitored, particularly those with depressed moods, alcohol/substance abuse disorders, and inadequate treatment continuity.