Variations in suicide method and in suicide occurrence by season and day of the week in Russia and the Nenets Autonomous Okrug, Northwestern Russia: a retrospective population-based mortality study 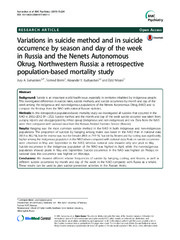 Background: Suicide is an important world health issue, especially in territories inhabited by indigenous people. This investigated differences in suicide rates, suicide methods, and suicide occurrence by month and day of the week among the indigenous and non-indigenous populations of the Nenets Autonomous Okrug (NAO) and to compare the findings from the NAO with national Russian statistics.

Methods: In this retrospective population-based mortality study we investigated all suicides that occurred in the NAO in 2002–2012 (N = 252). Suicide method and the month and day of the week suicide occurred was taken from autopsy reports and disaggregated by ethnic group (indigenous and non-indigenous) and sex. Data from the NAO were then compared with national data from the Russian Federal Statistics Service (Rosstat).

Conclusions: We showed different relative frequencies of suicide by hanging, cutting, and firearm, as well as different suicide occurrence by month and day of the week in the NAO compared with Russia as a whole. These results can be used to plan suicide prevention activities in the Russian Arctic.