Cardiovascular health and the modifiable burden of incident myocardial infarction: The Tromsø Study 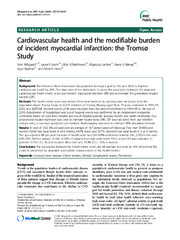 Methods: The health metric score was derived from ideal levels of six cardiovascular risk factors from the population-based Tromsø Study of 22,121 residents of Tromsø, Norway aged 30 to 79 years, examined in 1994–95, 2001, and 2007–08. Incident events of MI were recorded from the date of enrollment in 1994–95 to the end of 2010. Adjudication of hospitalized and out-of hospital events was performed by an independent endpoints committee based on data from hospital and out-of hospital journals, autopsy records and death certificates. Cox proportional hazard regression was used to estimate hazard ratios (HR). GIF was calculated from age stratified analysis using a case-load weighted-sum method. Bootstrapping was used to estimate 95% simulation intervals.