Low oxygen saturation and mortality in an adult cohort; the Tromsø Study 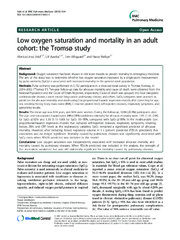 Background: Oxygen saturation has been shown in risk score models to predict mortality in emergency medicine. The aim of this study was to determine whether low oxygen saturation measured by a single-point measurement by pulse oximetry (SpO2) is associated with increased mortality in the general adult population.

Methods: Pulse oximetry was performed in 5,152 participants in a cross-sectional survey in Tromsø, Norway, in 2001–2002 (“Tromsø 5”). Ten-year follow-up data for all-cause mortality and cause of death were obtained from the National Population and the Cause of Death Registries, respectively. Cause of death was grouped into four categories: cardiovascular disease, cancer except lung cancer, pulmonary disease, and others. SpO2 categories were assessed as predictors for all-cause mortality and death using Cox proportional-hazards regression models after correcting for age, sex, smoking history, body mass index (BMI), C-reactive protein level, self-reported diseases, respiratory symptoms, and spirometry results.

Results: The mean age was 65.8 years, and 56% were women. During the follow-up, 1,046 (20.3%) participants died. The age- and sex-adjusted hazard ratios (HRs) (95% confidence intervals) for all-cause mortality were 1.99 (1.33–2.96) for SpO2 ≤ 92% and 1.36 (1.15–1.60) for SpO2 93–95%, compared with SpO2 ≥ 96%. In the multivariable Cox proportional-hazards regression models that included self-reported diseases, respiratory symptoms, smoking history, BMI, and CRP levels as the explanatory variables, SpO2 remained a significant predictor of all-cause mortality. However, after including forced expiratory volume in 1 s percent predicted (FEV1% predicted), this association was no longer significant. Mortality caused by pulmonary diseases was significantly associated with SpO2 even when FEV1% predicted was included in the model.