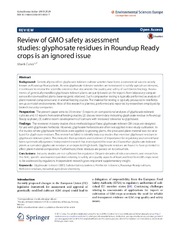 Background - Genetically modified glyphosate-tolerant cultivar varieties have been a commercial success widely known as Roundup Ready plants. As new glyphosate-tolerant varieties are introduced to satisfy agriculture demand, it is relevant to review the scientific evidence that documents the quality and safety of such biotechnology. Assessments of genetically modified glyphosate-tolerant plants are partly based on the reports from laboratory comparisons with non-modified plants (near-isogenic relatives). Such comparative testing is typically performed as analysis of plant material composition and in animal feeding studies. The material for testing is typically produced in test-fields set up as model environments. Most of this research is planned, performed and reported by researchers employed by biotech industry companies.

Conclusions - Industry studies are not sufficient for regulation. Despite decades of risk assessments and research in this field, specific unanswered questions relating to safety and quality aspects of food and feed from GM crops need to be addressed by regulators. Independent research gives important supplementary insight.