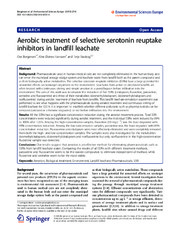 Background: Pharmaceuticals used in human medical care are not completely eliminated in the human body and can enter the municipal sewage sludge system and leachate water from landfill both as the parent compound and as their biologically active metabolites. The selective serotonin reuptake inhibitors (SSRIs) have a large potential for unwanted effects on nontarget organisms in the environment. Leachates from active or old closed landfills are often treated with continuous stirring and simple aeration in a pond/lagoon before infiltration into the environment. The aim of this work was to simulate the reduction of five SSRIs (citalopram, fluoxetine, paroxetine, sertraline and fluvoxamine) and three of their metabolites (desmethylcitalopram, didesmethylcitalopram and norfluoxetine) during aerobic treatment of leachate from landfills. This landfill leachate-simulation experiment was performed to see what happens with the pharmaceuticals during aerated treatment and continuous stirring of landfill leachate for 120 h. It is important to establish whether different pollutants such as pharmaceuticals can be removed (oxidized or otherwise degraded) or not before infiltration into the environment.

Conclusions: Our results suggest that aeration is an effective method for eliminating pharmaceuticals such as SSRIs from landfill leachate water. Comparing the results of all SSRIs with different treatment methods, paroxetine and fluvoxamine seem to be the easiest compounds to eliminate independent of method, while fluoxetine and sertraline seem to be the most stable.