Changes in detection of birth defects and perinatal mortality after introduction of prenatal ultrasound screening in the Kola Peninsula (North-West Russia): combination of two birth registries 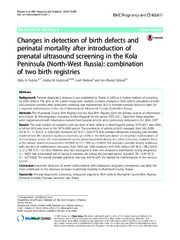 Background: Prenatal diagnostics ultrasound was established in Russia in 2000 as a routine method of screening for birth defects. The aims of the current study were twofold: to assess changes in birth defects prevalence at birth and perinatal mortality after ultrasound screening was implemented and to estimate prenatal detection rates for congenital malformations in the city of Monchegorsk (Murmansk County, North-West Russia).

Methods: The Murmansk County Birth Registry and the Kola Birth Registry were the primary sources of information, and include 30 448 pregnancy outcomes in Monchegorsk for the period 1973–2011. Data from these registries were supplemented with information derived from hospital records about pregnancy terminations for 2000–2007.

Conclusion: Improved detection of severe malformations with subsequent pregnancy termination was likely the main contributor to the observed decrease in perinatal mortality in Murmansk County, Russia.