Drug permeability across a phospholipid vesicle-based barrier: 4. The effect of tensides, co-solvent and pH changes on barrier integrity and on drug permeability 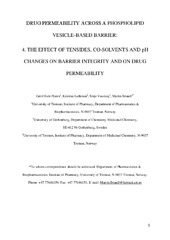 In this study the integrity of the recently developed phospholipid vesicle-based permeability barrier in the presence of a variety of co-solvents and tensides has been investigated. Also included are studies of the influence of these additives on drug permeation and the effect of pH changes on the permeability of ionogenic drug compounds. Permeability experiments using the hydrophilic model compound calcein together with polysorbate 80 (Tween 80), polyoxyl 35 castor oil (Cremophor EL), macrogol lauryl ether (Brij 35), sorbitan monolaurate (Span 20), polyethylene glycol 400 (PEG 400), ethanol and dimethylsulphoxide (DMSO) were performed to determine whether the barriers were affected by the presence of these additives in the donor compartment. It was found that the integrity of the phospholipid vesicle-based barriers did not seem to be influenced by Span 20 up to a concentration of 5 mg/ml, PEG 400 up to a concentration of 40 mg/ml and ethanol and DMSO up to a concentration of 20 mg/ml, respectively. Brij 35, Tween 80 and Cremophor EL were however found to be incompatible with the model at all concentrations as the barriers became leaky. Appearance of phospholipid in the donor chamber in presence of these three tensides indicated that the loss of integrity was due to partial dissolution of the phospholipid vesicles from the barrier. The permeability of testosterone was not significantly improved by the presence of the different co-solvents, except for 40 mg/ml PEG 400 and 20 mg/ml DMSO where the permeability was increased. In the pH study the permeability of metoprolol and naproxen was shown to decrease with increasing degree of ionisation according to the pH partition hypothesis. This renders the permeability model suitable for using pH-shift as a factor to influence solubility of drugs as well as to predict segmental absorption in the gastrointestinal tract.

© 2008. This manuscript version is made available under the CC-BY-NC-ND 4.0 license (http://creativecommons.org/licenses/by-nc-nd/4.0/)