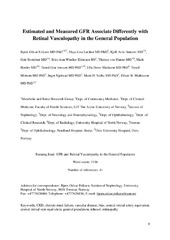 Background/Aims: Estimated GFR (eGFR) is used extensively in epidemiological research. Validations of eGFR have demonstrated acceptable performance, but the dependence of creatinine and cystatin C on non-GFR factors could confound associations with disease. Few studies have investigated this issue in direct comparison with measured GFR (mGFR). We compared the associations between eGFR and mGFR and retinal vasculopathy, a marker of systemic microvasculopathy.

Methods: Iohexol clearance and retinal photography were examined in the Renal Iohexol Clearance Survey in Tromsø 6 (RENIS-T6), which consists of a representative sample of middle-aged persons from the general population. A total of 1553 persons without selfreported kidney disease, cardiovascular disease or diabetes were investigated. Three eGFR equations based on creatinine and/or cystatin C from the CKD-EPI-Collaboration were studied. Differences between eGFR and mGFR were analyzed with seemingly unrelated regression methods.

Results: mGFR in the lowest quartile was associated with an increased multivariableadjusted odds ratio of retinopathy (OR 1.86, 95% confidence interval 1.16-2.97), but not with retinal artery or vein diameters. eGFRcys was consistently biased relative to mGFR in its associations with retinal vessel diameters across different models. eGFRcrea and eGFRcyscrea were also biased in several of these models (P<0.05). For retinopathy, the differences between the three eGFRs and mGFR were not statistically significant.

Conclusions: Low mGFR is associated with retinopathy in the general population. eGFR based on creatinine and/or cystatin C are not valid substitutes for mGFR in studies of the relationship between the retina and kidney function in healthy persons.