Involuntary psychiatric admission: how the patients are detected and the general practitioners' expectations for hospitalization. An interview-based study 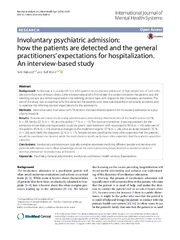 Methods: Semi-structured interviews with 74 doctors that had referred patients for involuntary admission at a psychiatric hospital.