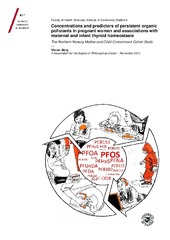 During the 20th century, humans have been exposed to an increasing number of persistent organic pollutants (POPs). However, due to restrictions on use and the banning of several POPs, environmental concentrations of POPs have generally decreased since the 1980s. POPs are transferred to humans primarily through diet and are transferred from the mother to the foetus during pregnancy and to infants through breastfeeding. Potential endocrine disrupting effects of POPs on thyroid functions especially in pregnant women, foetuses and children are of concern. The aim of this thesis was to investigate concentrations and predictors of POPs in pregnant women from The Norwegian mother-and-child contaminant cohort study sampled in the period 2007-2009. Maternal serum samples donated during the 2nd trimester were analysed for a suite of PFASs and OCs, whereas ten thyroid parameters were analysed 2nd trimester, three days and 6 weeks postpartum. Concentrations of thyroid stimulating hormone (TSH) in infants were obtained from the Newborn Screening program. POPs, biomarkers, predictors and covariates included in the present work were evaluated by multivariate methods to assess the overall effects on maternal and infant thyroid function of multipollutant exposures. Parity was the most important predictor for all POP concentrations. Further, we identified sampling date to be an important predictor of several PFASs, where concentrations declined throughout the recruitment period. This work demonstrates associations between several POPs and maternal TSH and thyroid hormones (THs) throughout the sampling period, where variables related to metabolic changes due to pregnancy were important predictors for TSH and TH concentrations at all sampling points. The clinical relevance of observed variations in TSH and THs is not clear, as all concentrations varied within normal reference ranges. However, the results indicate an influence of background exposures to POPs on maternal thyroid function which may influence foetal and infant thyroid function.