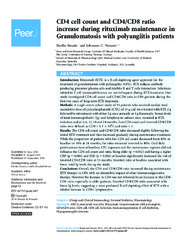 Introduction
Rituximab (RTX) is a B cell-depleting agent approved for the treatment of granulomatosis with polyangiitis (GPA). RTX reduces antibody producing precursor plasma cells and inhibits B and T cells interaction. Infections related to T cell immunodeficiency are not infrequent during RTX treatment. Our study investigated CD4 cell count and CD4/CD8 ratio in GPA patients during the first two years of long-term RTX treatment.
Methods
A single centre cohort study of 35 patients who received median total cumulative dose of cyclophosphamide (CYC) of 15 g and were treated with RTX 2 g followed by retreatment with either 2 g once annually or 1 g biannually. Serum levels of total immunoglobulin (Ig) and lymphocytes subsets were recorded at RTX initiation and at 3, 6, 12, 18 and 24 months. Low CD4 count and inverted CD4/CD8 ratio were defined as CD4 < 0.3 × 109/l and ratio < 1.
Results
The CD4 cell count and CD4/CD8 ratio decreased slightly following the initial RTX treatment and then increased gradually during maintenance treatment. While the proportion of patients with low CD4 cell count decreased from 43% at baseline to 18% at 24 months, the ratio remained inverted in 40%. Oral daily prednisolone dose at baseline, CYC exposure and the maintenance regimen did not influence the CD4 cell count and ratio. Being older (p = 0.012) and having a higher CRP (p = 0.044) and ESR (p = 0.024) at baseline significantly increased the risk of inverted CD4/CD8 ratio at 24 months. Inverted ratio at baseline associated with lower total Ig levels during the study.
Conclusions
Overall, the CD4 and CD4/CD8 ratio increased during maintenance RTX therapy in GPA with no discernible impact of other immunosuppressive therapy. However the increase in CD4 was not followed by an increase in the CD4/CD8 ratio, especially in older patients. Inverted CD4/CD8 ratio associated with lower Ig levels, suggesting a more profound B cell depleting effect of RTX with a relative increase in CD8+ lymphocytes.