Use of social media for sexual health promotion: a scoping review 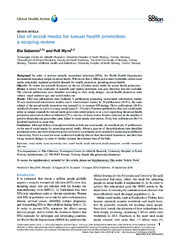