Non-completion of upper secondary school among female and male young adults in an Arctic sociocultural context; the NAAHS study 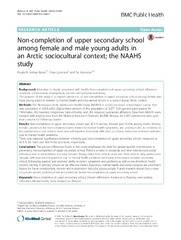