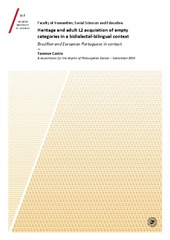 Despite their high degree of mutual intelligibility, Brazilian Portuguese (henceforth BP) and European Portuguese (henceforth EP) have been argued to differ in many micro-parametric domains, which suggests that speakers with enough exposure to both varieties could potentially acquire them as separate mental systems. The present study makes use of this language pairing to investigate issues raised in current literature on heritage language (HL) and second language (L2) acquisition (e.g., Montrul & Polinsky, 2011, Sorace, 2011), L2 processing (Hopp, 2016; Hartsuiker & Pickering, 2008) and first language (L1) attrition (Altenberg, 1991; Schmid, 2011). We apply a comprehension task in order to test anaphora resolution in two groups of speakers exposed to BP and EP, taking into account the different null subject distribution in these languages. We investigate whether late BP-EP bilinguals and heritage BP speakers growing up in Portugal, tested in both dialects, will pattern like native controls or display some effects of EP on their native BP or vice-versa. Through an open-ended production task, we also attempt to measure these speakers’ distribution of both null subjects and objects and compare that to the pattern shown by monolingual controls. In a second comprehension task, we test the extent to which BP immigrants arriving in adulthood display cross-linguistic effects such that either or both EP and BP differ(s) from monolinguals. Our findings indicate that, for this language pairing, the directionality of cross-linguistic influence is more dependent on which properties are being acquired, and the high degree of typological proximity between the L1 and the L2 appears to facilitate L1 attrition and delimit the acquisition of L2 properties. We relate the findings of the present study to key theoretical questions and debates within the context of the larger field of bilingual studies.