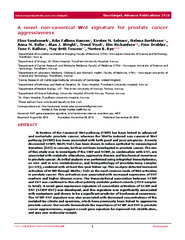 Activation of the Canonical Wnt pathway (CWP) has been linked to advanced and metastatic prostate cancer, whereas the Wnt5a-induced non-canonical Wnt pathway (NCWP) has been associated with both good and poor prognosis. A newly discovered NCWP, Wnt5/Fzd2, has been shown to induce epithelial-to-mesenchymal transition (EMT) in cancers, but has not been investigated in prostate cancer. The aim of this study was to investigate if the CWP and NCWP, in combination with EMT, are associated with metabolic alterations, aggressive disease and biochemical recurrence in prostate cancer. An initial analysis was performed using integrated transcriptomics, ex vivo and in vivo metabolomics, and histopathology of prostatectomy samples (n=129), combined with at least five-year follow-up. This analysis detected increased activation of NCWP through Wnt5a/ Fzd2 as the most common mode of Wnt activation in prostate cancer. This activation was associated with increased expression of EMT markers and higher Gleason score. The transcriptional association between NCWP and EMT was confirmed in five other publicly available patient cohorts (1519 samples in total). A novel gene expression signature of concordant activation of NCWP and EMT (NCWP-EMT) was developed, and this signature was significantly associated with metastasis and shown to be a significant predictor of biochemical recurrence. The NCWP-EMT signature was also associated with decreased concentrations of the metabolites citrate and spermine, which have previously been linked to aggressive prostate cancer. Our results demonstrate the importance of NCWP and EMT in prostate cancer aggressiveness, suggest a novel gene signature for improved risk stratification, and give new molecular insight.

This article is also available at 10.18632/oncotarget.14161
This is an article under the terms of the Creative Commons Attribution 3.0 License, which permits use and distribution in any medium, provided the original work is properly cited, the use is non-commercial and no modifications or adaptations are made.