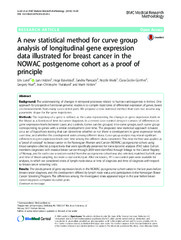 Background: The understanding of changes in temporal processes related to human carcinogenesis is limited. One approach for prospective functional genomic studies is to compile trajectories of differential expression of genes, based on measurements from many case-control pairs. We propose a new statistical method that does not assume any parametric shape for the gene trajectories.
Methods: The trajectory of a gene is defined as the curve representing the changes in gene expression levels in the blood as a function of time to cancer diagnosis. In a nested case–control design it consists of differences in gene expression levels between cases and controls. Genes can be grouped into curve groups, each curve group corresponding to genes with a similar development over time. The proposed new statistical approach is based on a set of hypothesis testing that can determine whether or not there is development in gene expression levels over time, and whether this development varies among different strata. Curve group analysis may reveal significant differences in gene expression levels over time among the different strata considered. This new method was applied as a “proof of concept” to breast cancer in the Norwegian Women and Cancer (NOWAC) postgenome cohort, using blood samples collected prospectively that were specifically preserved for transcriptomic analyses (PAX tube). Cohort members diagnosed with invasive breast cancer through 2009 were identified through linkage to the Cancer Registry of Norway, and for each case a random control from the postgenome cohort was also selected, matched by birth year and time of blood sampling, to create a case-control pair. After exclusions, 441 case-control pairs were available for analyses, in which we considered strata of lymph node status at time of diagnosis and time of diagnosis with respect to breast cancer screening visits.
Results: The development of gene expression levels in the NOWAC postgenome cohort varied in the last years before breast cancer diagnosis, and this development differed by lymph node status and participation in the Norwegian Breast Cancer Screening Program. The differences among the investigated strata appeared larger in the year before breast cancer diagnosis compared to earlier years.
Conclusions: This approach shows good properties in term of statistical power and type 1 error under minimal assumptions. When applied to a real data set it was able to discriminate between groups of genes with non-linear similar patterns before diagnosis.

This is an open access article distributed under the terms of the Creative Commons Attribution License, which permits unrestricted use, distribution, and reproduction in any medium, provided the original author and source are credited.
This article is also available via DOI:10.1186/s12874-016-0129-z