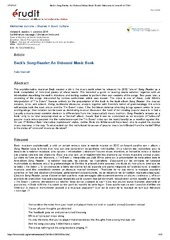 The pop/alternative musician Beck created a stir in the music world when he released his 2012 “album” Song Reader as a book compilation of individual pieces of sheet music. This included a guide to reading music notation, together with an introduction describing the work’s intentions and inviting readers to perform their own versions of the songs. Two years later, a recording of the songs interpreted by various well-known artists was issued. The video to one of these, Jack White’s interpretation of “I’m Down,” focuses entirely on the presentation of the track in the book-album Song Reader: the musical notation, lyrics, and artwork. Using multimodal discourse analysis together with Derrida’s notion of grammatology, this article will analyse both the book-album and the “I’m Down” video. If the Derridean violence of writing brings speech under its over-arching wings, then notation can be seen as dominating musical discourse: the habit of not notating popular music is in fact a (usually subconscious) semiotic decision to differentiate from the (classical/art) music tradition. Song Reader’s release as a book, only to be later reappropriated as a “normal” album, means that it can be understood as an example of “unbound” popular music reincorporated into the mainstream—yet the “I’m Down” video can be read (literally) as a rebellion against this. Or can it? Without their “alternative mainstream” status, neither Beck nor White would have been able to exploit the popular music business in this way. To what extent can the institutional discourse of popular music be infiltrated from the inside? What is the status of “unbound” music-as-literature?

This article is under the terms of the Creative Commons Attribution Non-Commercial No Derivatives License.
This article is also available via DOI:10.7202/1038035ar