The Association Between Adiponectin, Serum Uric Acid and Urinary Markers of Renal Damage in the General Population: Cross-Sectional Data from the Tromsø Study 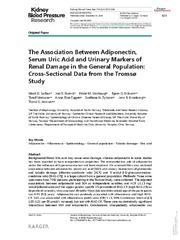 Background/Aims: Uric acid may cause renal damage, whereas adiponectin in some studies has been reported to have renoprotective properties. The renoprotective role of adiponectin under the influence of hyperuricemia has not been explored. We assessed the cross-sectional association between adiponectin, serum uric acid (SUA) and urinary biomarkers of glomerular and tubular damage (albumin-creatinine ratio [ACR] and N-acetyl-β-D-glucosaminidasecreatinine ratio [NAG-CR]) in a large cohort from a general population.
Methods: Three urine specimens from 7062 persons, participating in the Tromsø Study, were collected. The adjusted associations between adiponectin and SUA as independent variables, and ACR ≥1.13 mg/ mmol (albuminuria) and the upper gender specific 15 percentile of NAG-CR (high NAG-CR) as dependent variables, were assessed.
Results: Mean (standard deviation) age of the participants was 63.5 (9.2) years. Adiponectin was positively associated with albuminuria and high NAGCR. SUA was associated with albuminuria (odds ratio [OR] 1.13; 95% Confidence Interval [CI] 1.05-1.21 per 59 μmol/L increase), but not with NAG-CR. There were no statistically significant interactions between SUA and adiponectin.
Conclusions: Unexpectedly, adiponectin was positively associated with both urinary markers of renal damage. SUA was positively associated with albuminuria only. SUA and adiponectin added little beyond traditional cardiovascular risk factors to predict renal damage and did not interact in their associations with the urinary biomarkers. Longitudinal studies are needed before firm conclusions can be made.