Disease-related mortality among 21,609 Norwegian male military peacekeepers deployed to Lebanon between 1978 and 1998 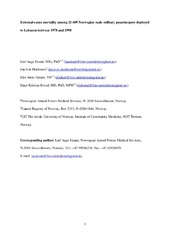