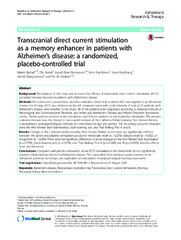 Background: The purpose of this study was to assess the efficacy of transcranial direct current stimulation (tDCS) on verbal memory function in patients with Alzheimer’s disease.

Methods: We conducted a randomized, placebo-controlled clinical trial in which tDCS was applied in six 30-minute sessions for 10 days. tDCS was delivered to the left temporal cortex with 2-mA intensity. A total of 25 patients with Alzheimer’s disease were enrolled in the study. All of the patients were diagnosed according to National Institute of Neurological and Communicative Disorders and Stroke and Alzheimer’s Disease and Related Disorders Association criteria. Twelve patients received active stimulation, and thirteen patients received placebo stimulation. The primary outcome measure was the change in two parallel versions of the California Verbal Learning Test–Second Edition, a standardized neuropsychological memory test normalized by age and gender. The secondary outcome measures were the Mini Mental State Examination, clock-drawing test, and Trail Making Test A and B.

Results: Changes in the California Verbal Learning Test–Second Edition scores were not significantly different between the active and placebo stimulation groups for immediate recall (p = 0.270), delayed recall (p = 0.052), or recognition (p = 0.089). There were nonsignificant differences in score changes on the Mini Mental State Examination (p = 0.799), clock-drawing test (p = 0.378), and Trail Making Test A (p = 0.288) and B (p = 0.093). Adverse effects were not observed.

Conclusions: Compared with placebo stimulation, active tDCS stimulation in this clinical trial did not significantly improve verbal memory function in Alzheimer’s disease. This study differs from previous studies in terms of the stimulation protocol, trial design, and application of standardized neuropsychological memory assessment.