School performance after experiencing trauma: a longitudinal study of school functioning in survivors of the Utøya shootings in 2011 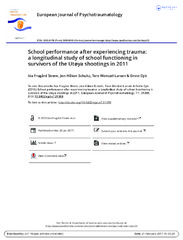 Background:
The psychological impact on survivors of terrorism has been well documented. However, studies on adolescent survivors and the academic performance of high school students following a terrorist attack are lacking.
Objective:
This study investigated academic performance, absenteeism, and school support amongst survivors of a terrorist attack in Norway.
Method:
Data from a longitudinal interview study were linked to officially registered grades of students (N=64) who successfully completed their 3-year senior high school program. Statistical tests of mean differences and linear regression were used to compare the survivors’ registered grades with the national grade point average, before and after the event, as well as to assess absenteeism, self-reported grades and to test the association with school support.
Results:
The students’ grades were lower the year after the event than they had been the year before, and they were also lower than the national grade point average (p<0.001). However, their grades improved in the last year of high school, indicating possible recovery. Absence from school increased after the event, compared to the previous year. However, students reported high satisfaction with school support.
Conclusion:
The results indicate that academic functioning was reduced in the year after the traumatic event, but for students who successfully completed high school, the school situation improved 2 years after the event. The findings underscore the importance of keeping trauma-exposed students in school and providing support over time. A more defined educational approach to maintaining school attendance and educational measures which compensate for learning loss are needed in trauma-sensitive teaching.