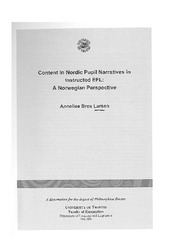 The thesis focuses on pupil narratives in English, and the narratives are studied with an emphasis on substantial content. The focus is on the first edition of the publicised text. It is important to distinguish between the text and the writer and to clarify what the object of the study is: The pupil’s narrative text is interpreted. Although this does not imply that the writer of the text is insignificant to the study, the focus is on his/her text. When pupils write narrative texts, they are indirectly influenced by other texts. Because pupils often write rehearsed phrases to practise chunks in the target language, the possibly pupil produced content of their narratives may be difficult to identify. To ensure that the pupil texts can be viewed as something more than language practice, that is as pupil produced content, a method for identifying such content is developed. A literary interpretation which identifies the novel elements of pupil texts - compared to their intertexts - is chosen. The primary objective is to discuss what is dealt with in such narrative texts. To determine whether the content can be seen to form a discourse (Foucault, 1977; 1986), and if it does, what aspects of identity this discourse expresses, is essential. At the social level, the pupils are members of a local society; they live in a particular part of the world. The discourses related to national identity could, for instance, be voiced in texts that they exchange with TALE pupils from other countries; or a global identity could be more dominant, or other aspects of identity could be expressed in such narratives. The personal and social identity of the pupil is marked by all these different contexts and discourses that the individual belongs to. The age group that is focused on here is twelve to fourteen, (i.e. pubertal) and in psychology, this period is characterised, for example, by the oedipal liberation from the parents (Freud, [1917] 1992: 275; 1958). In psychological notions of the term ‘identity’, the personal identity of the pupil is marked by the traits of this particular stage in their development. The relationships to family members like parents and siblings are developed in various discourses, the relationship to friends and schoolmates likewise. At the personal level, the gender-roles and sex-roles are explored in various discourses. This study wants to find out what aspects of identity are given voice to in the narrative texts in TALE. The thesis addresses the following questions:
1. What characterises the discourse that is developed in the narratives?
2. What aspects of identity are expressed in this discourse?
In conclusion, the thesis discusses briefly the possible bearing of this study of narratives on the work with pupil narratives in EFL in school.