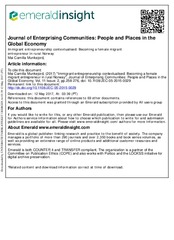 Purpose – This paper aims to address the rural and gender gaps in the immigrant entrepreneurship literature by exploring the start-up stories of 18 female immigrants who currently run a business in northernmost Norway.
Design/methodology/approach – The paper is based on a qualitative fieldwork including business visits and in-depth interviews. The transcripts from the interviews were analysed using a constructivist grounded theory (CGT) approach.
Findings – Four modes of entry to entrepreneurship were identified: entrepreneurship as a way out of unemployment; entrepreneurship as a means to avoid underemployment, entrepreneurship as a means to live in a region of perceived attraction; and entrepreneurship as a preferred choice for women in satisfactory wage labour. In addition, the paper reveals the importance of family support and of spatial embeddedness among immigrant entrepreneurs living in a rural context.
Practical implications – This study notes that the modes of entry to rural immigrant entrepreneurship are diverse, but that they are often partly related to the pursuit of an initial feeling of belonging in the new region of settlement. Hence, developing the knowledge of how to not only attract but also retain and increase the feeling of local belonging of immigrants may be important for many rural regions in the Western world. This is because rural immigrants not only represent a much needed in-flow of younger people in a typically decreasing and ageing population but also entail cultural variation and job creation, thus contributing to place development.
Social implications – The paper argues for the importance of considering immigrant entrepreneurs as significant actors of rural development.
Originality/value – While immigrant entrepreneurship has emerged as an important field of study, it has been criticised for focusing predominantly on men and for neglecting contextual variations in the analysis. The rural context especially has been largely omitted. By focusing on female immigrants having established