Fighting to be Heard – in Russia and in Sápmi. Russian Sámi representation in Russian and pan-Sámi politics, 1992 -2014 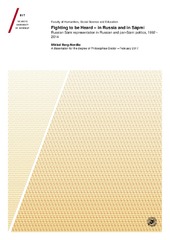