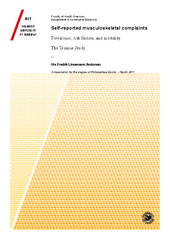 This thesis used data from the large-scale population-based Tromsø Study. More than 45,000 inhabitants of the municipality of Tromsø participated in at least one of the seven surveys conducted between 1974 and 2016 (Tromsø 1-7). In the papers constituting this thesis, musculoskeletal complaints (MSCs) were defined as having pain and/or stiffness in muscles and joints lasting for at least 3 months the previous year. In the Tromsø 6 survey (2007/08), 8,439 (42.7%) of the 19,762 invitees provided a complete questionnaire on MSCs and were included in the analyses. In Paper I, which employed a cross-sectional study design and utilised data from the Tromsø 6 survey, 15.8% (women: 19.4%, men: 12.1%) of participants reported severe MSCs at one or more of the six body regions specified in the questionnaire. More than half of the 8,439 participants reported at least one MSC. Among those, nearly three-quarters reported MSCs in more than two body regions, which is in accordance with previous research. Hence, it is more common to report at least one MSC than no MSCs at all. Participants who reported MSCs were more likely to report coexisting negative health factors than participants without MSCs. Paper II had a prospective study design and investigated risk factors for MSCs utilising data from both the Tromsø 4 (1994/95) and Tromsø 6 surveys. Several of the associations revealed in Paper I showed evidence of temporality (i.e. a predictor present before the end-point) in Paper II, which is one of several criteria of causality. In accordance with previous research, poor self-reported general health status, tobacco smoking, and low educational level were predictors of MSCs. Physical inactivity did not predict subsequent MSCs 13 years later, after adjusting for other factors. Mental distress (i.e. depression and/or anxiety) was only a predictor of MSCs among men, doubling the odds of MSCs. None of the risk factors we investigated increased women’s risk of MSCs more than men’s, and could not explain the higher prevalence of MSCs among women. The present thesis demonstrated that modifiable and non-modifiable risk factors are important to consider when dealing with MSCs in both clinical and research settings. Finally, presence of MSCs did not increase mortality risk in the general population of Tromsø (Tromsø 4 survey, 1994/95) during an 18-21-year period (Paper III). In the future, it would be of great value to explore protective factors among the relatively large part of the general population that seemed to be free of MSCs throughout different surveys and to examine if people respond differently to differently worded questions on MSCs.

The paper II of this thesis is not available in Munin.
Paper II: Andorsen, O. F., Ahmed, L. A., Emaus, N., Klouman, E.: “A prospective cohort study on risk factors of musculoskeletal complaints in a general population. The Tromsø study”. (Manuscript). Published version available in PLoS ONE 12(7): e0181417.