A nationwide survey of first aid training and encounters in Norway 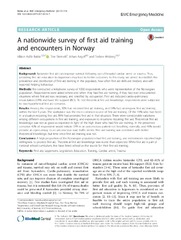