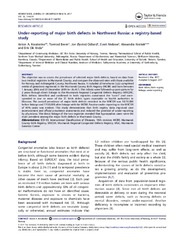 The objective was to assess the prevalence of selected major birth defects, based on data from two medical registries in Murmansk County, and compare the observed rates with those available for Norway and Arkhangelsk County, Northwest Russia. It included all newborns (≥22 completed weeks of gestation) registered in the Murmansk County Birth Registry (MCBR) and born between 1 January 2006 and 31 December 2009 (n=35,417). The infants were followed-up post-partum for 2 years through direct linkage to the Murmansk Regional Congenital Defects Registry (MRCDR). Birth defects identified and confirmed in both registries constituted the “cases” and corresponded to one or more of the 21 birth defect types reportable to health authorities in Moscow. The overall prevalence of major birth defects recorded in the MRCDR was 50/10,000 before linkage and 77/10,000 after linkage with the MCBR. Routine under-reporting to the MRCDR of 40% cases was evident. This study demonstrates that birth registry data improved case ascertainment and official prevalence assessments and reduced the potential of under-reporting by physicians. The direct linkage of the two registries revealed that hypospadias cases were the most prevalent among the major birth defects in Murmansk County.